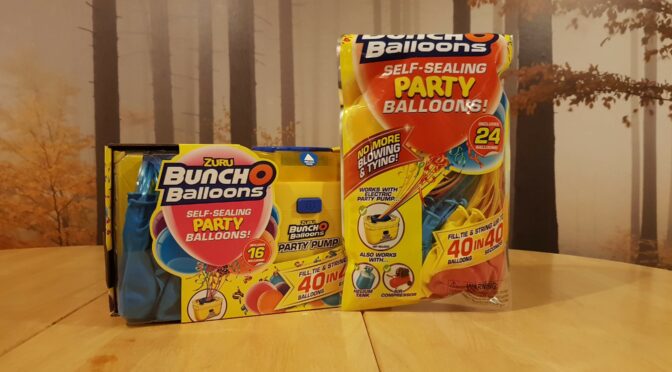 My baby boy is now 6 years old. SIX!! How did that even happen? This year I was very clear to him that he could either have a party with all of his school chums, or he could have a special day out with his bestie.

He opted for a special day out, which was lovely and perfect (and a real relief as it was cheaper and more fun for me) but I had a surprise up my sleeve for him. As a treat I said he could invite three friends round for a birthday tea after school, so he could have cake and a but of fun.

The only trouble with my little plan was me. Completely disorganised and struggling to complete even the most simple of tasks me. Thankfully ZURU has sent L a wonderful Birthday box of goodies which was an absolute life saver.

I haven’t been myself recently, far from it, so for the first time ever I didn’t bake L’s birthday cake. No worries as supermarkets have plenty of cake and small boys don’t care what the cake looks like so long as it is cake and they can eat it.

Presents weren’t an issue, we had order L a new tractor to go with his farm toys and that was wrapped and ready to go. Plus there were gifts from friends and family. ZURU had also sent him a ROBO Alive Dino which was an immediate hit. It walks and roars and a chomps it’s jaws, not to mention has glow in the dark claw marks on it’s side. A great gift for any dino mad kid and one that is is already well loved.

I hadn’t even considered party bags, as I hadn’t really arranged a party, just a birthday tea with friends. But the morning of the meal I panicked and thought that the kids would be bringing gifts and would have no idea that a meal with cake and presents and singing happy birthday wasn’t a party! So I popped into town and grabbed some little gifts bags and some mini bags of sweets. Each bag got some sweets, a balloon and a ZURU Smashers Dino egg. We love the Smashers range, especially the Dino series and they made the perfect filler for the party bags. The boys loved them and I loved getting to hear from them the next day about what surprise they got, tales of skulls, zombie dinosaurs and cavemen were rife in the playground.

My biggest worry was decorations. I literally hadn’t spared it any thought. Have I mentioned I’ve not been myself recently. Normally there would be banners and a few balloons, as many as I could be bother to inflate, even a party popper or two. But the night before I literally hadn’t sorted a thing. I found some party poppers hidden away in a cupboard and I still had last years banner, but honestly I didn’t fancy sticking it to the freshly painted walls. Once again ZURU’s birthday box was to the rescue, they literally have everything to make birthdays a breeze. ZURU Bunch-O-Balloons Party pump will inflate, tie and ribbon up to 40 balloons in 40 seconds. It’s genius. So what I was lacking in decoration I made up for in balloons, all the balloons, so many balloons!

The pump itself is £14.99 and comes with 16 balloons. It’s so simple to use. Plug it into the mains, twist the top ring to the right number of balloons. Insert balloon stems and press the on button until the balloons are fully inflated. They get nice and large and the stay inflated for ages, three weeks on and I’m having to subtly pop teeny holes in them so I can deflate them and claim our spare room back. It also comes with attachments so that you can use the pump to inflate other things like airbeds, lilos and more. So handy. Oh, and you can use the pump and balloons with helium tank if you want, so fab, I’ll definitely be doing that next year.

You can buy ZURU Bunch-O-Balloons Party balloons in packs of different colours and we got sent a few of those too. You get 24 balloons in a pack and they cost £9.99. So I went to town and filled the room with balloons. It looked amazing and L was so excited, in the words of Winnie the Pooh ‘nobody can be uncheered with a balloon’ and boy is that true. He is a wise bear. The room looked great and when L’s friends came round they moved all the balloons into our spare room and went crazy, all kinds of games were played, most of which seemed to involve shrieking.

I love that the balloons are made from natural latex rubber and the stems and o-rings are 100% recyclable, perfect when you are inflating a lot of balloons. I’ll be honest though, mostly I love that in a few seconds and even less effort I had a room of balloons fit for the best party.

You can get the Bunch-O-Balloons Party items from Smyths, The
Entertainer, B&M and at select Tesco and Asda stores. You can find out even more at bunchoballoonsparty.com

It was so helpful for me that ZURU had everything sorted for a great birthday. From a gift for the birthday boy, to party bag supplies and even the party balloons. It made my life so much easier and L adored his day and all his gifts.

Disclosure – we were gifted our ZURU Bunch-O-Balloons party items, all thoughts, opinions and images are my own.