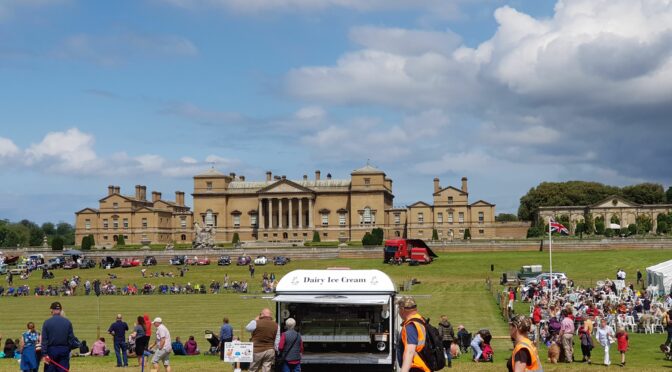 Recently L and I spent an amazing day at Holkham Country Fair. We were guests for the day and had Vice Presidents tickets, so had a lovely base to explore from and go back to when wanted a bit of a break. We had so much fun and will certainly be returning for the next fair.

There was so much at the fair. Amazing displays in the centre ring, plenty of shopping, a fairground, food village, vintage cars and tractors, animals and more. We literally didn’t manage to see everything and were there for 5 hours. All of this with the stunning Holkham Hall as your backdrop, we couldn’t have asked for a better day out.

Having Vice Presidents tickets meant we got to park a lot closer in the VPs carpark, this was very useful for us as we went back to the car a few times to drop off coats and grab our picnic. It also meant we go to use the Vice Presidents enclosure next the to Grand Ring, so we had space, seating and a great view whenever we needed it. There was also the chance to have lunch or use the bar their too and not to mention bathroom facilities. We used it as a base for our day, returning when there was something we wanted to watch or if we just needed a little break. For the car parking alone this was definitely worth it!

In the Grand Ring

There was so much to watch in the aren, we could have just sat down and spent the day watching what was going on. We watched the opening ceremony which involved the Poppy Parachute Team display, L’s face watching the fall to the ground was priceless and a fabulous show from The City of Norwich Pipe Band. L was desperate to go the fairground but would go until the pipers had finished piping, bless him.

We also watched the Broke FMX stunt bike display which was brilliant. Those guys are awesome and so brave, it was another great one to watch with L and he loved every second of it. Then it was eyes to the sky for the aerobatics display from Steve Carver.

Whilst we were looking round the fair we watched little bits of The Atkinson Action Horses display which looked great.

We were also lucky enough to have a ticket for one free fairground ride each, so we opted for the Ferris Wheel. L had never been on one before and was a bit nervous but it was the perfect ride for the two of us and we got great views over the whole of the Holkham Country Fair. I have created a Ferris Wheel monster in the kid though, he loved it and I have now had to promise that we’ll always have one go on any Ferris Wheel we see, anywhere, for the rest of eternity.

There was also a helter skelter, donkey rides, those swing chair rides I don’t know the name of, a little car ride and hook a duck from which L won a lovely set of plastic weapons!! I feel there may have been more that I just can’t remember too.

The rides were quite expensive, so we didn’t do much on that front but it was nice to do something.

We had bought a picnic with us for lunch, as had quite a few people and there were lots of lovely spots to sit down and eat. But if you hadn’t there was no shortage of food stands. With pretty much anything you could think of to eat.

We did enjoy a delicious frozen yoghurt that was huge and made me feel slightly better on the parenting front, I soon ruined that by spending a small fortune on pic n mix, oops.

There was plenty spread out around the site too, so you were never too far away from a drink, snack or full meal.

Well obviously there were plenty of animal to be seen. From the displays in the Grand Ring to the displays dotted round the fair.

We watched little bits and bobs of the horse displays and sat down to watch The Sheep Show at the other end of the fair, we’ve seen this a few times at various events over Norfolk and it’s always good. We also stopped to look at CJ’s Birds of Prey but didn’t get to see their display which is sad. We also had a look at the little mini zoo which had meerkats, skunks and tortoises amongst other things, they were offering kids sessions throughout the day so they could handle some of the animals which is lovely.

There was a family dog show, donkey rides, a huge ferret display and dog racing in the Grand Ring.

I feel we barely scratched the surface of the Holkham Country Fair, despite being there for hours, we just had so much fun and could have easily made a weekend of it.

As I mentioned there were a few displays we missed like CJ’s Birds of Prey and I wish we had watched a bit more of The Atkinson Action Horses and Hound Parade.

The Ferret Race sounded amusing too and I wish we had been there late enough to watch the Allcomer’s Dog Racing.

We missed all the animal handling sessions at The Exotic Animal Encounter Display and didn’t even make it as far as the Food Village, which I was reliably informed was giving out free gin samples so I am devastated about that!

We didn’t look at many of the shops, it’s not L’s idea of fun at all and there wasn’t anything I was really after but it would have been nice to have a browse.

The thing is, with so much on offer, you do have to prioritise your day and except that, especially with a child in tow, you may not see everything.

From a practical point of view I loved the VP passes, the carparking being close and ability to sit and chill when we needed was awesome.

L loved the Broke FMX display and all the tractors.

I loved all the displays we saw and getting to see a skunk, I’ve never seen one before and that was way more exciting than I was expecting! I loved getting to hang out having so much fun with my best boy all day too.

Two years is too long to wait for the next show!

Disclosure – we were guests of The Holkham Country Fair for the day, all thoughts, opinions and images are my own.