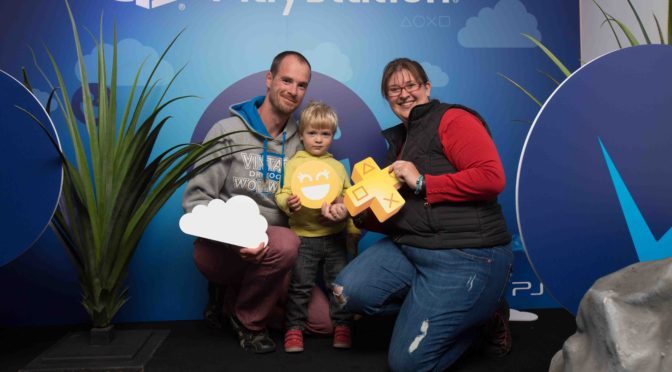 A couple of weekends ago we took a little trip to London with L. We had been invited to a Parenting & Kids Showcase with PlayStation.

For L it was a really exciting day, he got to go on the Tube, hang out with Mummy & Daddy, as well as getting to play a lot of games! He had a fab time.

I’m not a massive gamer, in fact I barely touch games at all. Husb loves it be we are always short on time, so his console gets a bit neglected and quite honestly it’s not something we’ve really done with L at all yet.

It has been something we’ve thought about though, he will game. I know that. His Daddy and him will play games together and then he’ll start wanting to play games by himself. Of course I worry a bit about how graphic some of them can be. I worry a lot that he’ll never go outside, which I know is ridiculous, he’s such an outdoorsy kid, but I’m his mummy. I worry. PlayStation have created a great guide with these worries in mind a parents guide to PlayStation and that’s what the whole event was about.

The show itself was fab, in a fab venue and brilliantly decorated. L had a go at playing some of the games himself. At one point he was just super happy ‘playing’ with a controller that wasn’t even plugged in!! Which is an idea we took home with us, he’s only three so just assumed it was him making the characters move, he wasn’t getting frustrated as everything was happening as he expected, it just wasn’t him doing it!

Husb got a couple of games of FIFA as well, so he was super happy. I’m pretty certain they were taking it easy on him though.

There was a crafts table set up so L and I had some fun decorating masks and being silly. I’m pretty certain L also ate all of the fruit, just all of it, he was very happy about the fruit supplies.

For me it was great to see some of the younger games. See what was out there and what would be suitable for him. Especially as it’s something I was so unfamiliar with personally, even husb only really knows about the games he plays so it was nice for him to try out some different things and see what they could play together as L gets older.

I loved little things like finding out you can set up the PS4 console so that it will only let games under a set age rating actually work, so even if your back is turned the kids can’t play something inappropriate.  It was great to see that they have games designed for ages 3+, I had just assumed this would be out of the question for L for a few years yet.

Of course the consoles are about way more than just gaming now. You can watch movies, TV, listen to music. There’s a full range of apps available and it can be really good fun.

Gaming, much like TV and chocolate, is great. Just in moderation. The same as I don’t let L watch TV all day long. I wouldn’t let him play games all day either.

Disclosure – I was invited to event as a guest of PlayStation, no payment was received and I wasn’t expected to write an article. I just thought it would be nice to share.