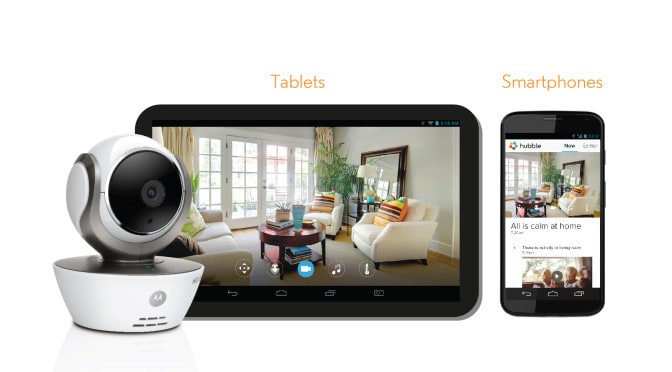 For the last few weeks we have been using the Motorola Focus 85 HD WiFi video monitoring camera.

We have had various home cams over the last year or so, so far they have all been static so I was really excited that with the Motorola Focus 85 we could zoom, pan and tilt the camera remotely.

I like being connected to a camera in the house. Initially it was great for the security, having been burgled in the past you always have a niggling thought at the back of your mind whenever you are away. Then when I went back to work I liked being able to tune in to the camera’s and get a little glimpse of my boy with his grandparents. Then when L made the move from cot to bed it became more important for me to be able to see what he was doing, not just hear him.

I have always loved the flexibility the connected home cam’s have given us, over and above a traditional baby monitor, I love being being able to use my phone or tablet to access the camera. I really like the sound and movement notifications. Being able to take an image or record a video is a real plus, I like the idea that if we were burgled again I might have the chance to get their faces and be able to do something about it, mainly I like being able to capture those little funny moments when no one knows I’m there.

So what make’s Motorola’s innovative new Focus 85 so great?

Well it has a whole host of features:

All of which you would expect and I am used to from other camera’s we’ve used but on top of that there is also:

Now these may not seem like much but for me they have made all the difference. The ability to move the camera is brilliant, I’ve got it set up in L’s room currently and I can see if he’s asleep, where he’s asleep and generally check on him wherever and whatever he is doing.

The room temperature display and notifications are also very useful, it would have been easier than the in room thermometer we used when he was little but now it is handy for other more mundane reasons. We went away in January, just for a couple of nights, when we came back the house was freezing because our boiler was broken. Now had we had the monitor we would have known, we’d have had an alert and we would have been able to ask our neighbour to pop in and check on things, we would have been able to tell the repair guy when it actually broke, we would have come home with hot food and we would have left L with his grandparents for an extra night instead of worrying about him in the cold all night. You see, it’s handier than you would think.

The music and two way speak versions would have been fab when L was little, but as he can reach the camera, I have purposefully not used them as I do not want to draw his attention to the camera, I rather like it, I want it to remain in tact!!

I also really like the Hubble app it’s compatible with iOS and Android. It was really easy to set up with the camera and get everything up and running, with less steps than others I’ve tried. It has been very reliable, more so than those of other devices we’ve used and most importantly it is really user friendly.

With a RRP of £89.99 from Argos and Currys I think it offers fantastic value for money, especially as it is a device you will be using for years and years.

Disclosure – we were sent our monitor free of charge, but all opinions are my own.

2 thoughts on “Our Review of the Motorola Focus 85”