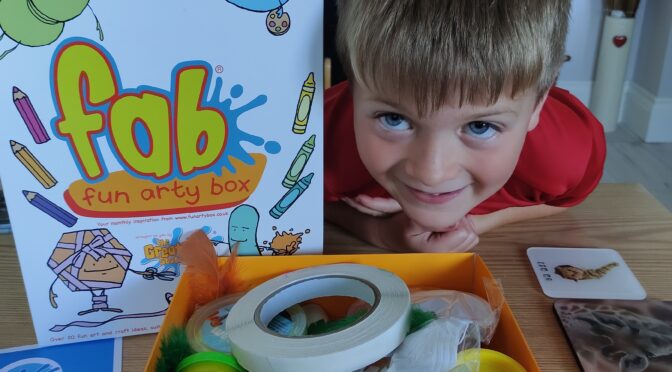 Last weekend we got sent a fab box of crafting goodies from The Creation Station so we could get creative and make some things based around some amazing Tiny Pop shows like My Little Pony, Super Grover 2.0 and Cookie’s Crumby Pictures. We had a blast making everything and better still thanks to Tiny Pop’s latest idea, Show and Tell, we’ve been able to share our creations with them for an opportunity for them to be featured on air and maybe even win a prize!

Everyone can join in with Tiny Pop’s Show and Tell promotion, it’s open until midnight Sunday 27th September and all you have to do is head to the website of app, upload a picture of your little one doing their favourite hobby, skill or a picture of their beautiful artwork. Tiny Pop want to see it all, if it makes your child happy it will make them happy and then you’re in with the chance of winning a fun prize or even being shown on air!

It’s super easy to enter and a lot of fun. Upload your picture, decorate it using the artpad, we added lots of Super Grover stickers to our entry, just make sure to get the little ones involved! I know L will be delighted if his picture gets onto the TV!!

I guess you want to know what we made, well our craft kit was full of so many exciting bits and bobs from The Creation Station and we also had some inspiring How To videos to watch as well. There was a real focus on the educational side of crafting as well as the simple joy it brings, I really liked that mix of information, especially as we were trying to do a project a night after school.

The first thing we got on with was our Cookie Monster crafts, L had seen a glimpse of the Play Doh in the box and wanted to crack on with whatever idea involved the fun squishy stuff. We made lots of our own Play Doh cookies, all different shapes, sizes, colours and patterns. We mixed colours and made practised making shapes. Then we cut up some card plates to display them on. Such simple fun, but it really was a lot of fun, it was also fun that didn’t involve much set up or cleaning up. Perfect for after school when we are both tired.

The next evening we got magical with My Little Pony. I was worried L wouldn’t want anything to do with this, still being in a very boys vs girls phase, but it was 100% his favourite crafting session. Using a little pony card blank, like the models you use for decopatch, and some amazing foam clay L decorated his own pony. Covering the model in the colourful, puffy clay, creating his own patterns and sticking in some jewels. It is really effective and now he’s been left with a model he can keep. We also made a little pony keyring using the foam clay, just by moulding it into the shape we wanted and pushing a keyring chain into it and leaving it to dry.

I had never used foam clay before and I am now obsessed with it, obsessed! It is mess free, easy to mould and either make free standing models from or cover other items with, it dries quickly and has a great fun texture. How it manages to be a glue that sticks to other items but not hands is beyond me, there must be some sort of witchcraft involved, but I have never done any kind of modelling with him that has been so easy. I shall be buying so much more of it, so much.

After a couple of nights off because of after school clubs and plain old exhaustion this morning we cracked on with our third and final crafting project, a Super Grover themed project. L decorated his own super hero cape, a simple project with a large sheet of paper and some pens. He made a football themed cape, with a big pitch in the middle, surrounded by lots of L’s because he is Super L! For the mask he coloured in round the edges, using the shapes already marked into the mask, using his favourite teams colours and added some feathers. The mask sadly did not last long, as we turned our backs to eat breakfast the cat got carried away with the feather situation and made off with the mask, which no longer has feathers, or a nose, or elastic. Don’t worry, the cat is fine, just the mask that suffered.

We’ve had a blast making these little projects and it has been great watching some of the new Tiny Pop shows. Cookie’s Crumby Pictures is hilarious, I think I find it more amusing than L as he has no idea what The Hungry Games is based on and he doesn’t know about Captain Snack Sparrow either. He definitely enjoys Super Grover 2.0 as there is lots of science and that’s his favourite things at the moment.

So why not have a go at some crafts this weekend and remember to head to Tiny Pop Show and Tell or use the Pop Fun App on iOS or Android to upload your pictures to be in with the chance of winning. You can watch Tiny Pop on Freeview 207, Youview 207, Sky 617, Virgin 737 and Freesat 605.

Disclosure – we were gifted our Fab Fun Arty Box and access to The Creation Station How To videos to allow us to share this fun Tiny Pop Show and Tell promotion. All thoughts, opinions and images are my own.

2 thoughts on “Show and Tell with Tiny Pop”