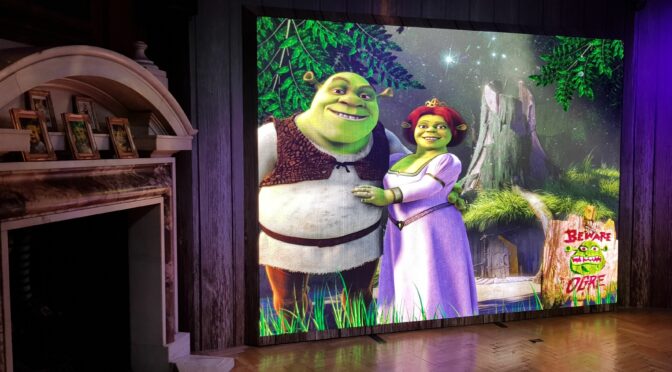 Over the Easter Holidays we had a lovely mini break in London. It was fab to have a really good explore and a lovely way for me to relax after all the goings on at home! We only had one real plan for our break and that was a trip to Shrek’s Adventure.

We had visited Shrek once before over Christmas and had a wonderful time. On one hand I was very excited to be returning, on the other I was worried that as we had visited once and it was no longer a surprise, that it might not be as good a second time round.

Things were a little different this time round. Over Christmas we had been part of a press event and were in before it had even opened to the public, this time, though our tickets were complimentary we were visiting during normal opening hours with standard timed tickets like everyone else.

Our time was 11am, the exact time it opened. We arrived about twenty minutes early and there was already a queue, most people already had there tickets and were just waiting to be let in. A few like us were waiting to pick up tickets or purchase them, there is a second line for this and it was very well managed. We popped in and had our tickets in no time, we then had to go back outside and join the other line for people with their tickets.

The lines were long but I felt they were managed effectively, we were in before long, there was a check of the bags for security. After security you are guided into the lifts, remember to look up, it’s fun and you get welcomed by Gingy. When you leave the lifts upstairs this is the only point you can visit the bathrooms, if you’ve got kids with you just make them, the whole experience is too long to be uncomfortable and needing a wee for.

We then waited as people dropped off bags and had their pictures taken with Shrek against a green screen. At the bag drop there is a chance to buy drinks and snacks and the fun Shrek headbands. I could not believe we had left our Donkey ears at home, rookie mistake there! Before heading to departures and being given our safety briefing before the tour of Far Far Away.

For me it is the talk in departures that actually signals the beginning of the real experience. As there is quite a bit that goes on before hand, lots of little queues and waiting, I would try and arrive for opening but if you are visiting later in the day when it is busier or you have young children who aren’t good with waiting I would seriously consider getting a Fast Track ticket, it really would make a massive difference as even with an allocated time slot there is still quite a bit of waiting around. It is just so busy.

My favourite part of the adventure is the 4D bus ride with Donkey at the start of the tour. It is some of the best 3D effects I have ever seen, even though it was my second visit the bus ride still took my breath away and left me in awe. You can’t help but look all around you as you are transported to Far Far Away with the help of all the other Dreamworks characters. It is jaw dropping and I wish it lasted longer. It bumps, it sways, you get blown around and splashed and ultimately you are just swept away by the real life magic of it and do genuinely forget where you are.

We then made our way through several different areas, solving puzzles and in the case of my husband, dancing for fortune tellers, to help find our way to Shrek. There are actors in each room helping the story along and adults and children alike are chosen to join in. The children get asked if they would like to help out, the unsuspecting adults are given no choice. I have never seen L laugh so hard as he did when his daddy was dancing for us all, I wish I had a photo of it but for many obvious reasons, our enjoyment being the main one, there are no cameras and all phones must be turned off during the experience. Though if there is CCTV footage anyone at Shrek’s Adventure would be willing to share with me I will pay good money for that footage, it would be worth it 🙂

The first time we visited I was worried it would be too loud and overwhelming for L, but it is not, the group sizes are managed so you never have too many people and even a full group like ours was this time round you have plenty of room and don’t feel crowded. There are light and sound effects throughout, but nothing overly loud and certainly nothing scary. So I knew that wouldn’t be an issue.

This visit I was worried that as we were fully aware of what would happen at each stage that we wouldn’t get as much enjoyment out of it. That wasn’t the case at all. Though obviously we weren’t shocked or surprised by how the story played out, it is still so immersive you get swept along by it all. L still joined in with everything and we all had a blast. That being said, unless you are a Shrek superfan, in which case you’ll get enjoyment each and every time you visit even if it were daily, the normally everyday person wouldn’t want to go too often.

After we had found Shrek and finished our adventure there are a few rooms with some of the other Dreamworks characters to hang out with and plenty of fun photo opportunities. Flying a plane with the Penguins of Madagascar or being fired out of a Cannon with Marty. You could learn martial arts with Po and find some inner peace meditating. It’s a fun little area to hang out and play in whilst everyone else checks out there photos from earlier. New in this area is a great How to Train your Dragon area and L loved it, he stopped for ages to have his picture taken with Toothless and Light Fury.

After a look at our photos and a quick decision not to buy them as L was pulling his best grumpy face to make me pay for not allowing him to see the Queen first thing that morning, despite various time constraints and you know, the fact she doesn’t tend to just chill out with five year olds boys she doesn’t know. We hopped back into the lift, said by to Gingy and checked out the gift shop before heading back into the real world.

Once again we had a fabulous time at Shrek’s Adventure! London, it is a brilliant and unique experience that you won’t find anywhere else. The actors are amazing, the attention to detail is unreal and it’s generally a thoroughly enjoyable way to spend a couple of hours. Chances are this won’t be our last visit as I know L will ask about it next time we’re in London and it is ideally situated to do a whole host of other things. You are next the river by the London Eye, Sea Life, the London Dungeons. Buckingham Palace is within walking distance and Westminster Abbey is just over the bridge.

Disclosure – we were gifted our tickets in return for an honest review. All thoughts, opinions and images are my own.