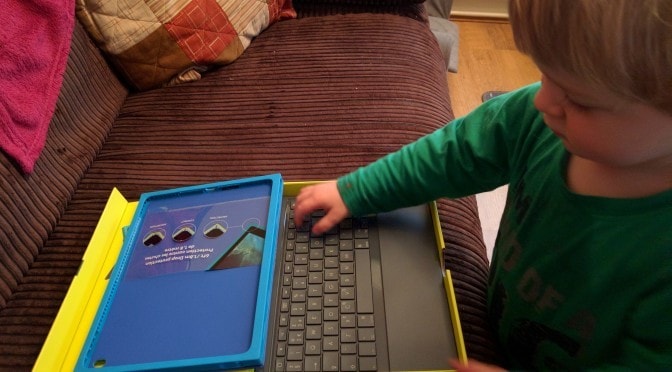 Is one of the most expensive things you own also your toddlers favourite play thing? That’s certainly the case in our house, thanks to YouTube and a nice man, Blippi, who sings about tractors and fire engines L loves the iPad. 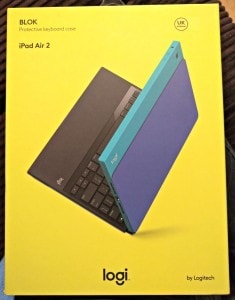 In all fairness he’s pretty good with it, he knows to be careful and he knows he can only have it when we say, but he also knows exactly where it’s kept and will often run and grab it and ask to use it.

He will fall, he will drop it and he will use it harder than we would like. That’s life.  And as you will see from the pictures of him after the case was arrived, if the small child is this excited about a new case, you can only imagine what he’s like with the iPad!

Now in our house most the tech is mine, I love it, but the iPad is my husband’s. He has his phone and dodgy old laptop that hardly works then he has his iPad, which he’d like to be able to use for more and he definitely needs to be kept safe from prying hands so when the BLOK from Logitech arrived he was really happy.

For starters Logitech have designed it to be dropped. Yes, dropped! The BLOK has been tested to heights of 1.8 meters onto surfaces as hard as concrete, so it can handle pretty much whatever a toddler throws (quite literally) at it.

Now I have actually tested this, not onto concrete, I was not brave enough, but I knocked the iPad off the kitchen counter onto the floor. Dropped it from standing. Let the boy stand on it. All things that I would consider ‘normal’ things to happen. It works like it says it will. Both the iPad and keyboard (I’m coming to that) were fine. You could see the corners take the impact and everything was fine.

It is fun and bright and stylish. The case offers the wake/sleep function which is so handy. Has all the access ports you need and the stand works at pretty much any angle, which is great for movies, or annoying videos about tractors! It feels good to hold. It is practical. It is beautiful.

It also offers a detachable Bluetooth keyboard which just snaps on and off with a magnetic strip, the keyboard is a really nice size and means that my poor husband can now pretty much ditch the laptop, so he’s very happy.

The whole case is light, sleek and really looks great. It’s easy to pop your iPad in and it holds firm. It’s not so easy to get it back out, but that’s a good thing really.

The BLOK starts at £49.99 which is great value and the keyboard version is £99.99, which may seem like a lot but considering our option was this or a new laptop, well, it’s nothing in comparison.

For me the only downside is that it only fits the iPad Air 2, so people with older versions can’t benefit from this marvellous case.

Disclosure – we were gifted our case for the purpose of this review.

One thought on “The BLOK iPad Case from Logitech – Review”